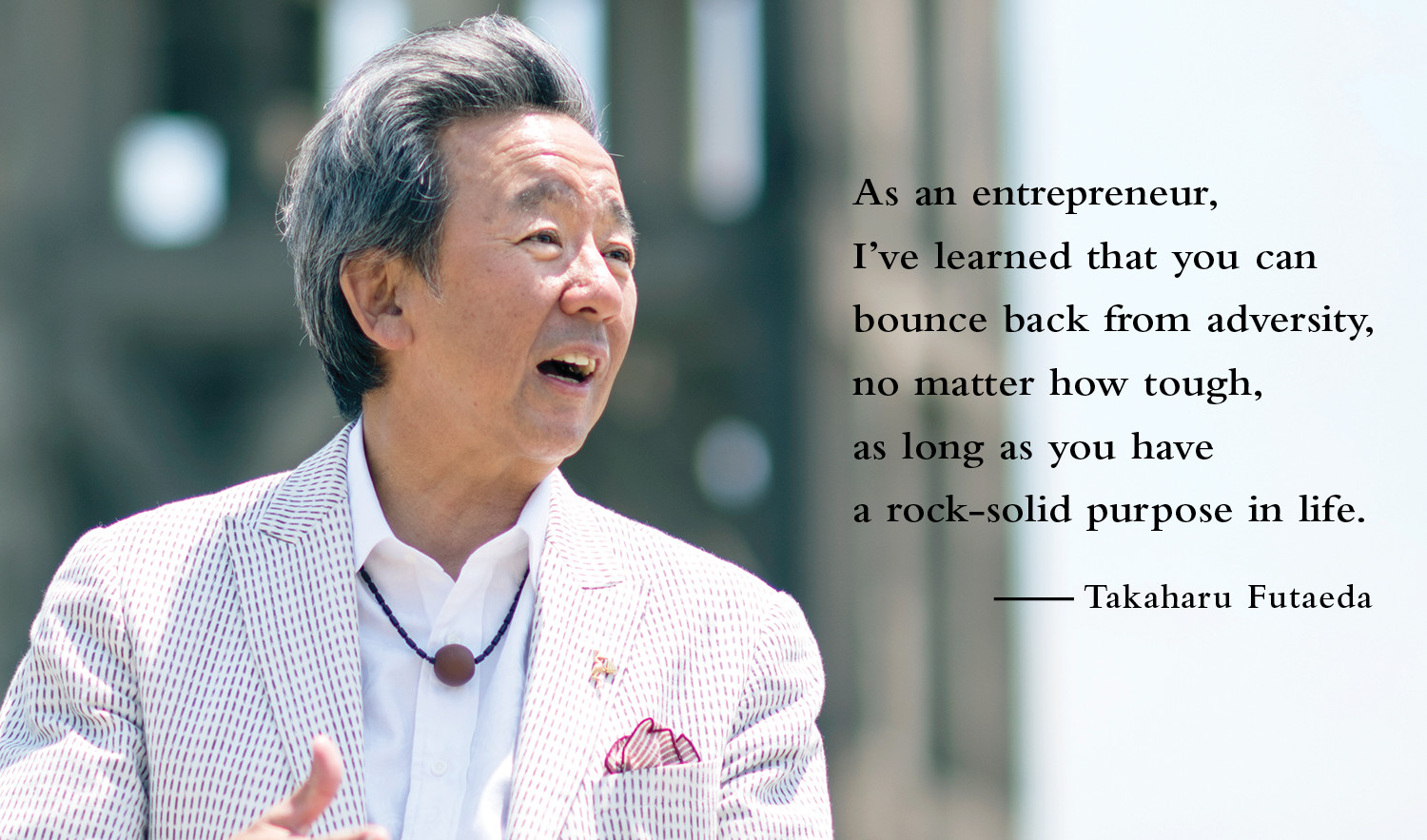 Awarded the 2017 Best Japan Resilience Award in Medical Manufacturing, Takaharu Futaeda shares his passion for business and how he went on to invent Hikari-reidan, his novel heating and cooling system.

CEO, Anny Group KFT
Born in 1959 in Fukuoka Prefecture, Takaharu Futaeda graduated from Fukuoka University affiliate Ohori High School. He opened his lifestyle shop Anny’s Favorites in 1988 and went on to build his spa Stone Healing in 2003. He has developed his own retail line of original, life-enhancing products, a self-made stone spa, and a radiant heating and cooling system that eliminates the need for air conditioners. His system, called Hikari-reidan, was patented in 2009 and was awarded the Global Warming Prevention Activity Award (Technology Development and Productization) from the Japanese Minister of the Environment in 2014, a first for a Kyushu-based company. The system also earned him the 2017 Best Japan Resilience Award (Medical Manufacturing).
*Positions and titles are current as of the time of this interview (June 2017).

An Interest in Stones 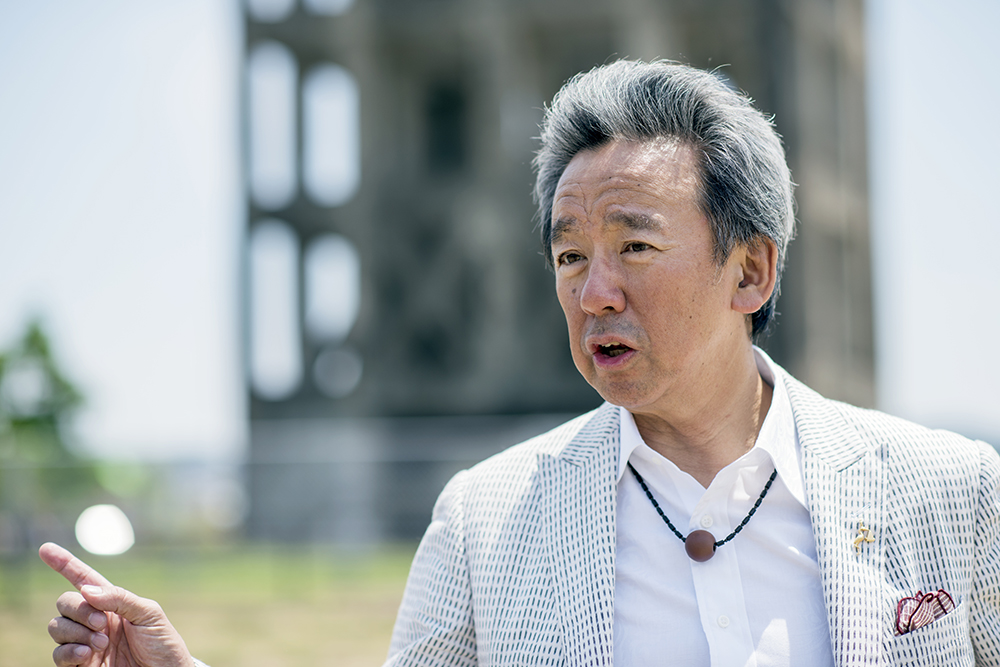 My business began with stones. I think it all started with the town of Shime in Fukuoka Prefecture, where I was born. Shime is home to the only state-owned mine in Japan and once flourished thanks to coal production. While the coal mines have long closed due to the coal imports that dominate the Japanese market, Shime remains a historical place valued for the quality, near-smokeless coal it produced. Every day when I was a child, I would play on the spoil tips – giant piles of waste rock removed during mining – and bring home small pieces of coal. At that time, we still burned wood to heat the bath water, and I would add my little piece of coal to the fire. Each piece of coal burned differently. As a child, I would watch them burn, thinking how strange it was that they each had their own energy. I was also interested in the stones and magnets that you find in mechanical watches. I think my unusual interests and ways of looking at the world developed when I was a boy. I still remember how happy I was in junior high school when our teacher praised me for being the only one in our grade to turn in a rock specimen when everyone else was collecting insects as part of our summer vacation homework.

As an adult, my interest in stones eventually led to product development. I have six children of my own, and two of them suffer from atopic dermatitis. When we went to England one summer, my second daughter wore a turtleneck despite the heat and humidity because the symptoms of her dermatitis were so terrible on her neck and shoulders. At the time, she was doing kendo in school. I remember once at practice I asked her if she wanted to take a break and apply ointment to the places where her uniform and helmet irritated her skin. But she refused to rest because she thought it would reflect poorly on me, her father, since both her teacher and coach were acquaintances of mine. I felt terrible that I hadn’t realized just how much pain she was in and how bad her symptoms actually were, but at the same time I was also touched by how thoughtful children can be toward their parents. We wanted to find a cure as quickly as we could, and in the process we discovered the positive effects of our products that used natural hot spring water. I tried hot spring water from different areas around Japan, and while different hot springs have different effects, what made the biggest difference was the composition of the bedrock through which the hot spring water percolates. And so I realized that it was the stones, not the water itself, that needed the most attention. 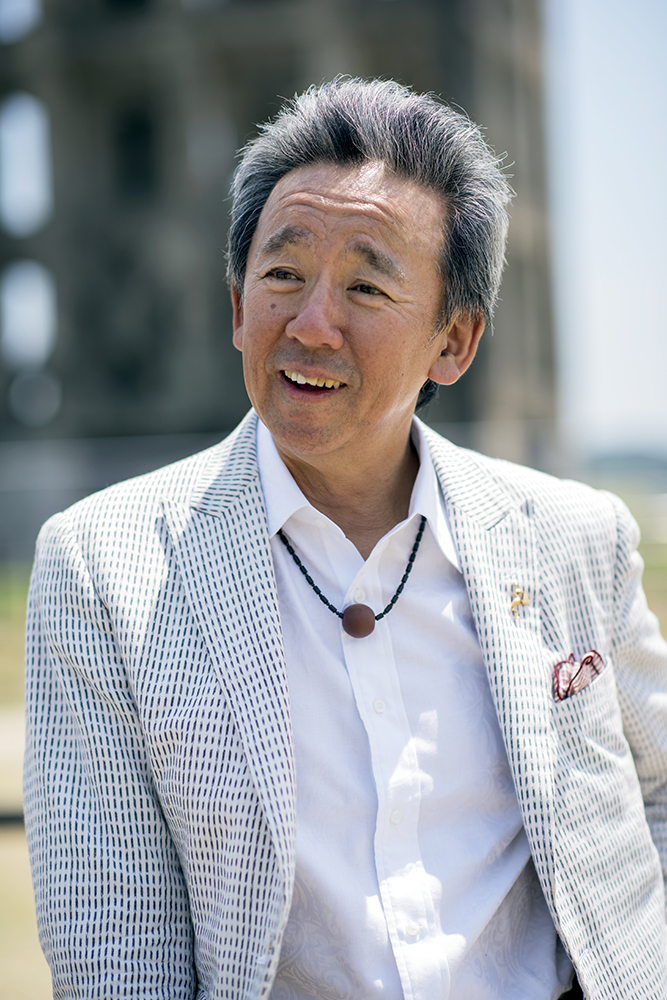 I’ve overcome two especially difficult times in my life so far. I believe that they are the very reason why both my company and I are here today. The first came when I was in college. I was studying at Kyoto Sangyo University, but my grandfather’s kimono shop had fallen on hard times, so I dropped out to go back home and help. Kimono have no fixed price, so the industry is built on credibility and trust. My grandfather’s shop was fairly well known locally, so when things started to decline we did other business without using the Futaeda family name to prevent our reputation from being tarnished. It took four years to rebuild the business and regain our name. Those four years were also when I got acquainted with talking to customers and learned the importance of making the first move as well as how to build lasting personal relationships.

The other difficult time came when I was trying to build Stone Healing, my spa business. Originally our goal had been to alleviate the symptoms of atopic dermatitis with topical soaps and lotions, and we had many satisfied customers. But I also thought that there might be a way to harness the energy of stones to create a positive internal state as well, and so we opened our first Stone Healing spa, which offered far-infrared ray and bedrock bath treatments. Even customers who weren’t satisfied with our other products were pleased with the facility. Our customer base grew quickly, and we expanded to 48 stores in just three years. We had plans to open even more stores so more people could experience stone healing when similar rock bathing businesses began popping up. Many of them had copied our facilities because we had failed to patent our operation. I remember there being somewhere around 3,000 stores in total. And because many of those stores used low-quality rocks, the media had a field day with headlines that read “Concerns over hygiene” and “Germs abound.” With this one-two punch, our customers vanished and sales dropped to just 20% of what they had been the year before. Eventually, we burned through all of the profits we had made over those three years.

Keep On Keeping On 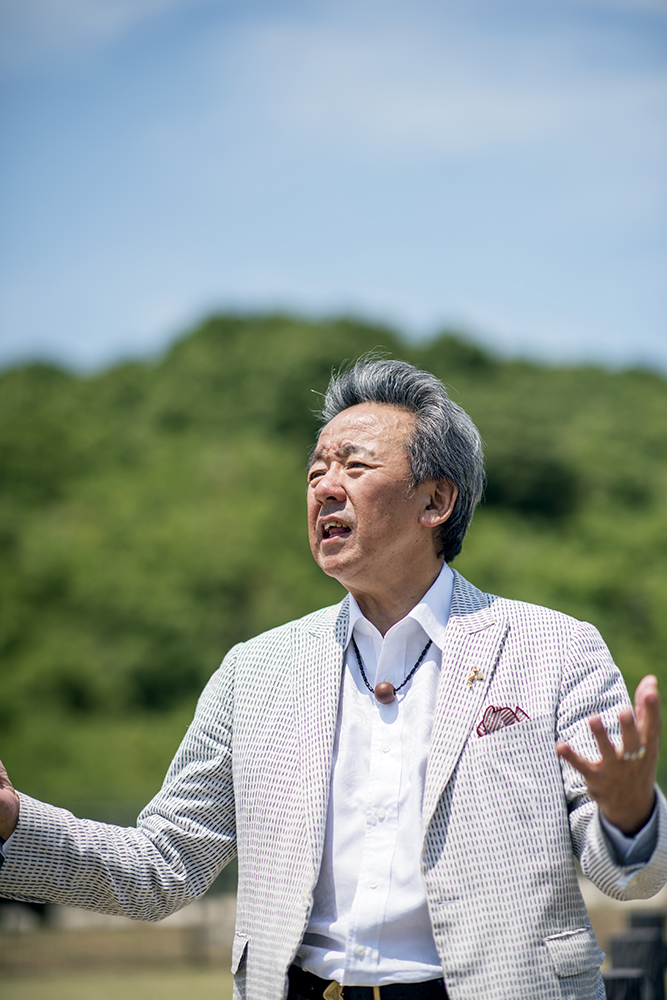 Even when faced with such a tough situation, we made repeated tests and renovations in hopes of satisfying every one of our Stone Healing customers. When we were renovating our facilities, we figured out how to use the stones to sweat at lower temperatures, and we also realized that we felt pleasantly cooler in a bath surrounded by stones than in a lobby with an air conditioner. We also discovered that stones absorb human body heat as they cool and feel much cooler than air conditioning. This discovery gave birth to Hikari-reidan, a heating and cooling system developed through Stone Healing technology.

The Hikari-reidan system is an indoor environment system that harnesses photon energy to control temperatures with a special ceramic coating on wall and ceiling surfaces. Experts come to experience the system, saying that while they understand the heating effect of ceramics, they cannot understand how it can have a cooling effect. But it is really quite simple. The system cools a room by taking the warm energy in the wall and ceiling panels and evenly distributing it across cooler areas. These same experts note the novelty of my non-expert perspective. There are now over 100 model rooms across Japan where you can experience Hikari-reidan. I have conducted joint research with The University of Tokyo, Kyushu University, Fukuoka Women’s University, and Kyushu Institute of Technology, and have turned my own home into an experimental facility, all in pursuit of a better product. 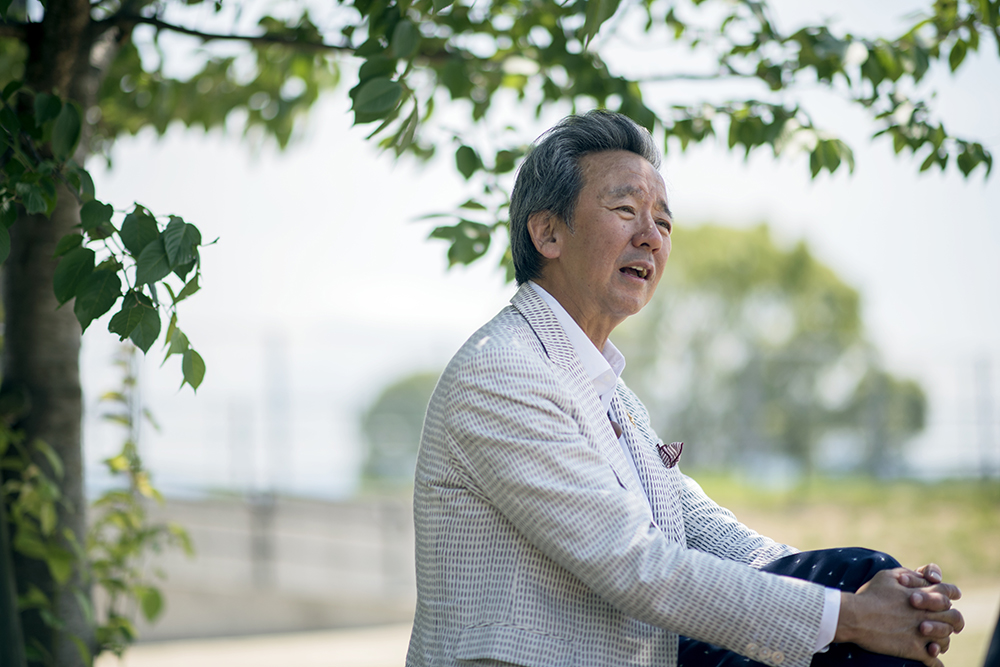 With Hikari-reidan, you can control the temperature using infrared without directly exposing yourself to the recycled air of air conditioning. Our technology received the 2014 Global Warming Prevention Activity Award (Technology Development and Productization) from the Japanese Minister of the Environment, and we received the 2016 Japan Resilience Award (Disaster Prevention Power).
In September 2015, Kengo Kuma, the renowned architect and designer behind the New National Stadium Japan, visited the Hikari-reidan showroom. I was overjoyed to hear the opinions of one of Japan’s most respected architects when he said that our technology would become the commonsense heating and cooling technology of the future. This encounter has led Kuma to design our company headquarters. It’s designed to be the little brother of the Winding Tower of Shime Coal Mine in Fukuoka, which has been designated as an Important Cultural Property. As of June 2017, we have finished the basic design and will begin construction in Fall 2017. Completion is scheduled for March 2019.

From a young age, I’ve always dreamed of proposing a truly earth-friendly lifestyle through accessories, bedding, housing, and even urban planning and community development. Now I’m gradually getting closer to fulfilling this dream. It may sound a bit extreme, but we at the Anny Group feel it is our duty to spread the good word about our products, even if that means selling customers a product before they fully understand its true value. Similarly, the Hikari-reidan Headquarters is a new start for us to build a business that overturns global common sense regarding heating and cooling. 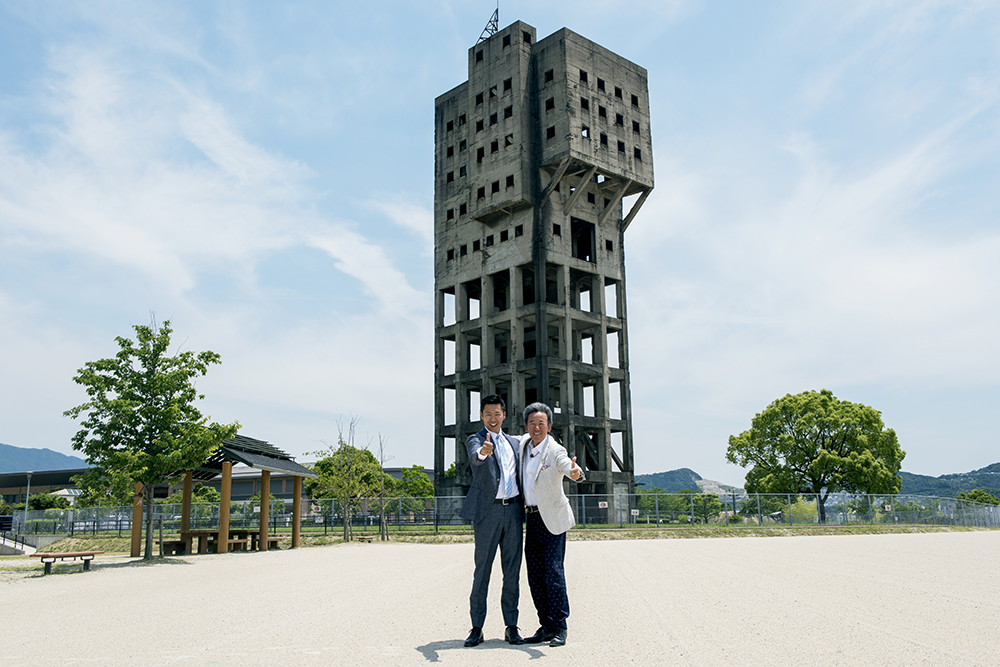 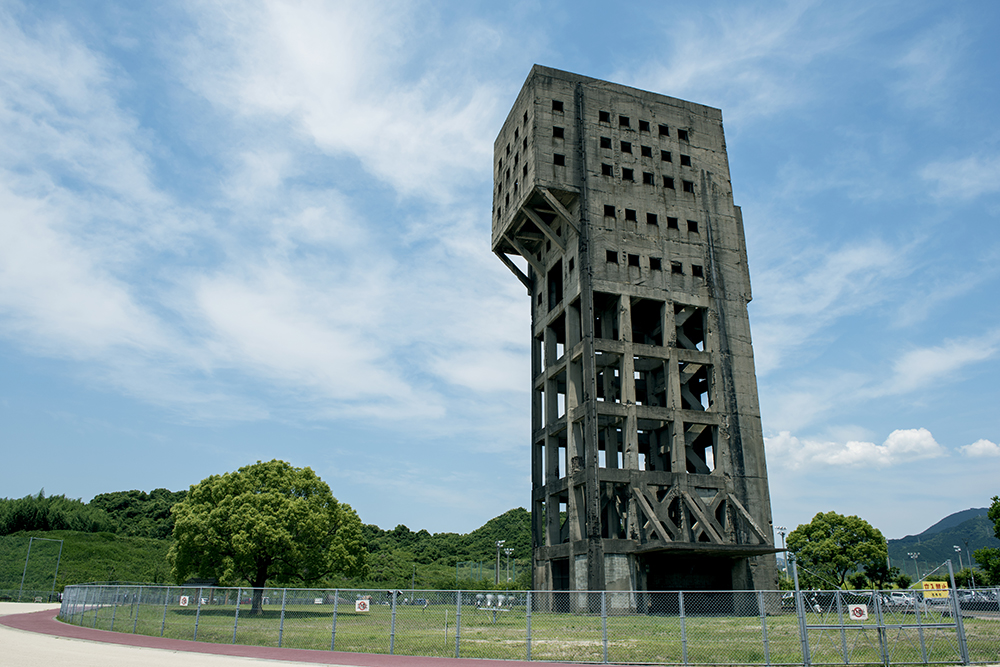 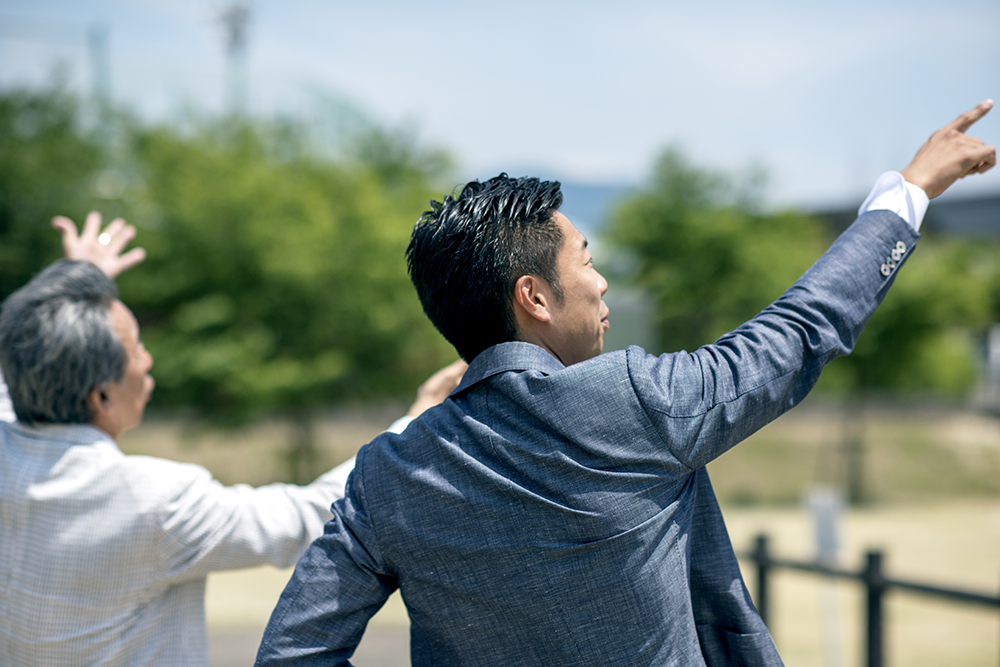 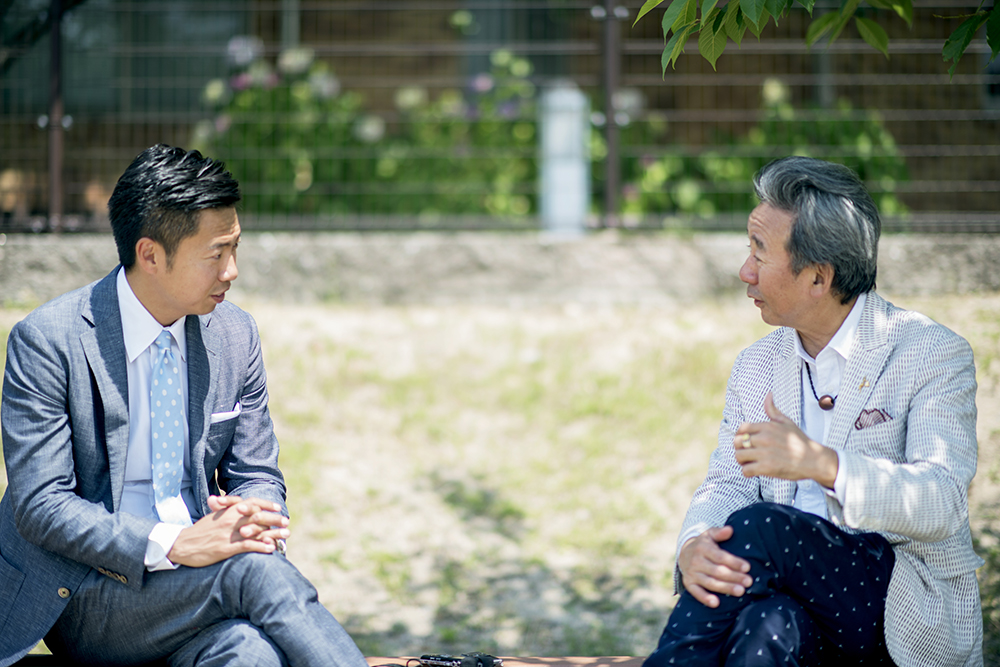 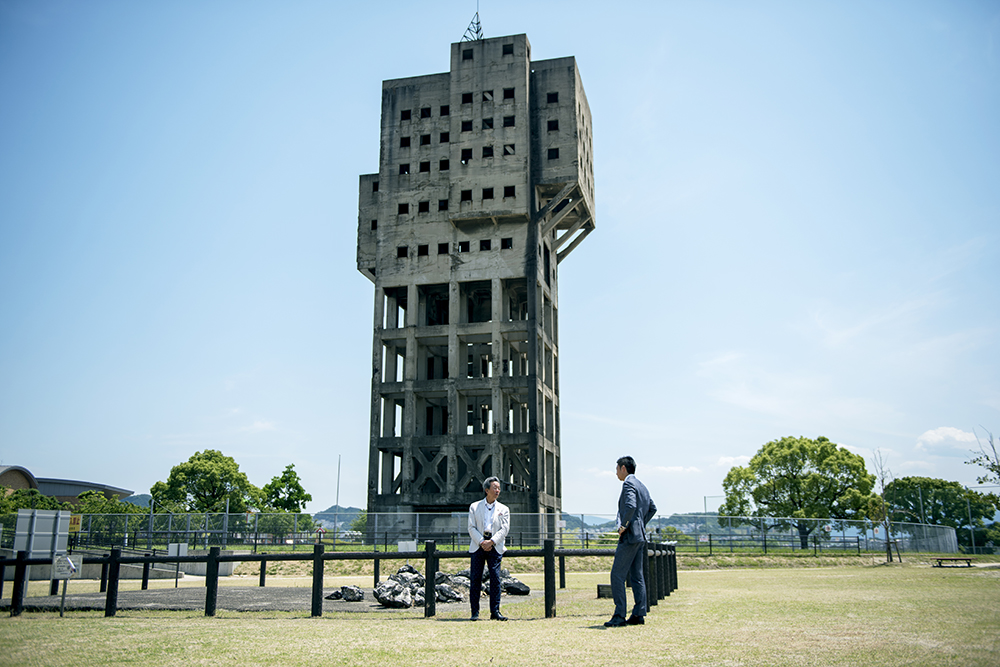 This interview helped me realize the importance of my mission in a new light. The town of Shime may have been a coal town in the past, but we live in a time of new energy. Due in part to the setting of this interview surrounded by the large spoil tips and Winding Tower of Shime Coal Mine.I feel a renewed sense of purpose and responsibility to usher in this new era of energy.
Daisuke’s positive reaction and genuine interest in our patented technology made me divulge more information than I usually do. His rapid-fire speaking style left a strong impression on me, but I was surprised at his poignant questions and ability to listen during the interview. It was almost as if I suddenly had a little brother.

“One of a kind” is the perfect phrase to describe Futaeda. I respect him for his consistent dedication to the development of products that are good for people and for the earth, all stemming from a childhood interest in stones. The Hikari-reidan system was invented through his power to transform pressure into possibility and a flexibility of thought unencumbered by preconceptions. Now more than 1,000 buildings use this system. I think that his system can and will be a game-changer in the air conditioning market.
I’m also looking forward to seeing the completion of the Kengo Kuma-designed Hikari-reidan Headquarters. I’m excited to see just how far the Hikari-reidan system will spread throughout the world. And I’m willing to do whatever I can to help.

Interview conducted in June 2017 at the Winding Tower of Shime Coal Mine in Fukuoka.
Editing: My Philosophy Editorial Team. Photography by Sebastian Taguchi. 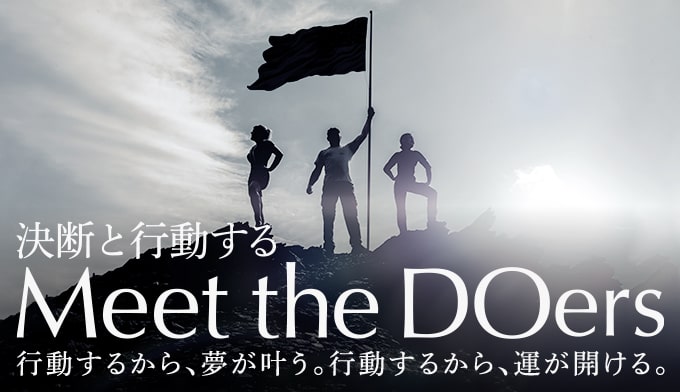 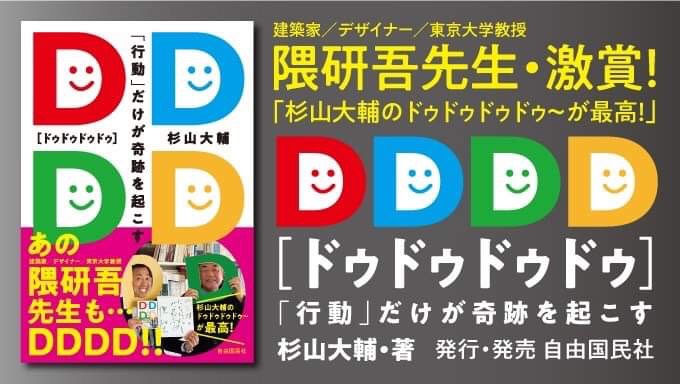